The Town of Garner and the Garner Area Historical Society recently partnered with the Johnston County Heritage Center and Bingham descendants to place a monument on the grave of the first postmaster and mayor of Garner's Station, Thomas A. Bingham. The historic Smithfield Riverside Cemetery was the burial site of Thomas Bingham, his wife and his daughter. The gravesite had not been marked until this ceremony.

A native of Johnston County, Thomas Bingham was a business person who moved to what is now Garner in the 1870's, where he owned a storehouse near the railroad line. Bingham requested the name "Garner’s Station" from the postal service and in September 1878 a post office was established; in 1883 Garner's Station was incorporated and Bingham was named the mayor. In 1891, Garner's Station lost its charter for reasons that are unclear; the community was re-incorporated in 1905 as the Town of Garner.

Todd Johnson, Director of the Johnston County Heritage Center, along with Garner historian Kaye Buffaloe Whaley, has done extensive research on Thomas Bingham. Bingham was involved in several different businesses throughout his life.  After leaving Garner in the late1880's, he returned to Johnston County. The location of the Binghams' graves was known, but was never marked with headstones or monuments. Thomas Bingham was featured as a character (portrayed by Broadway actor John Arthur Greene) in the Johnston County Heritage Center's annual Ghost Walk, which was recorded and broadcast on JCHC's YouTube Channel in October of 2020; the production can still be seen at JohnstonNC Heritage. 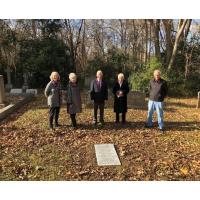