Big Ed’s Restaurant was first founded in 1958 by “Big Ed” Watkins, a native of Wake County. His family’s farm produced tobacco and other crops. It was on the homestead where Big Ed developed the original recipes used in his restaurants; he would assist his mother in the kitchen, preparing meals for the farm’s workers. After various successful restaurants in other Raleigh locations, Big Ed opened in Downtown’s City Market in 1989, which was done in conjunction with the city of Raleigh’s revitalization project. 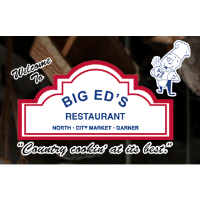